Bit of an OOC for halloween

When I first came to SL my form and mannerisms as well as appearance were all based on a character known as Sesshoumaru from the show Inuyasha for all those whom know the anime/manga although I dabbled a bit in neko for awhile. So yes Miss Laval, I've always had Sesshoumaru of Inuaysha in mind as I've been in SL.

After piecing together the outfit from several different avatars and having to make the armor myself I finally put together a decent looking Sesshoumaru avatar. All I have to say is finally... Ive scoured SL for this avatar. Oddly enough only one person in all of SL makes it and its frankly put... not that true to the character. 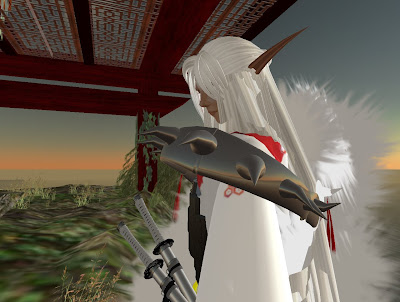 If *anyone* knows whom I can contact that makes custom skins... as you can plainly see. I'm all ears. The finishing touch to it, is the waxing moon and facial markings. 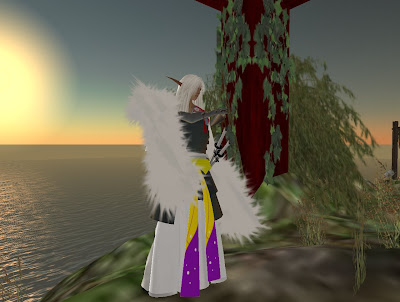 My human, aka me has done cosplay when the mood strikes. The photos below are an earlier model of the armor I made that was eventually tossed and redone the final photo with me battling Inuyasha is the final version. The armor is made from real cowhide by a saddle maker. It was made with metal at first but after slicing a few fingers almost off we decided to use a poly resin base fiberglass and molded the spikes to the armor out of pure fiberglass poured in molds... phew... mouthful. The ten foot obi and haori after having gone through alot of research concerning clothing worn in the Japanese feudal era was painstakingly embroidered by hand, a feat that took nearly a year itself. 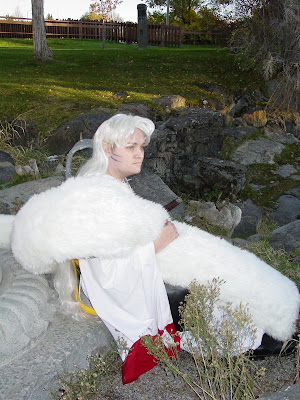 Those ears, itch like mad. Lunar can wear them better than I anyhow. 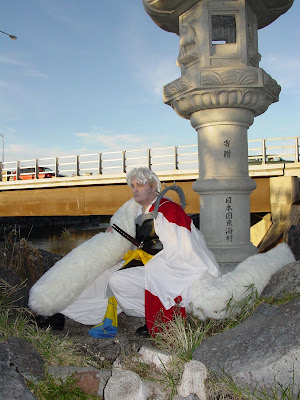 The whole costume is heavy as sin and due to regulations regarding weapons I was pleased I did not have to wear the double swords, I'm wearing close to thirty pounds at least with the fur monomoko over my shoulder as well as thick cowhide strapped around my chest to my knees. Ive only ever worn the entire ensemble twice before its displayed year round in a costume designers exhibit. We've been offered the sum of around 1500 usd for the whole thing and kindly declined not wishing to part with something that took over two years in the making. 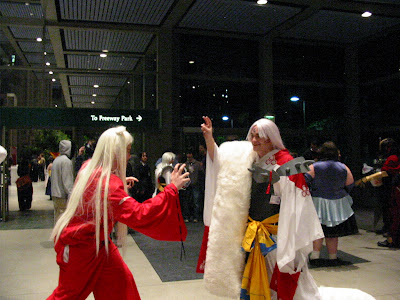 And of course I never go to conventions dressed alone. Tensai Hilra dressed as Kagura from Inuyasha. 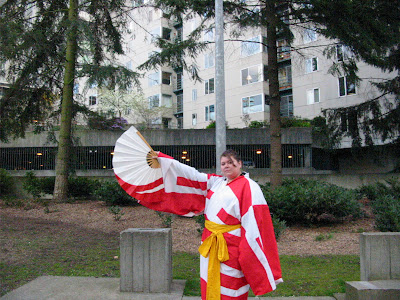 Cheers folks, happy Halloween.
Posted by TotalLunar Eclipse at 12:08 AM

Every Halloween I dress as Dr. Sam Beckett if he leaped into the body of me. Only person who can tell is Al, a hologram from Dr. Beckett's own time that appears in the form of a hologram that only Dr. Beckett can see and hear.

Amazing. A perfectionist in RL cosplay as will as on the Grid. Ichibanmeh!

LOL Fuzz, let me guess, you also turn your lights off so you don't have to share your treats with those pesky kids.

The convention I'm at in Seattle had over 5 thousand attending. cosplay.com has a list of conventions around the world happening at least twice a month now. Fiberglass helps... alot with weight. But it would be a sight to see, a steampunk android in RL.

hmm... maybe its not so farfetched of an idea.

Of course I turn my lights off. My neighborhood is filled with ungrateful little cretins, why should I give them candy? It ain't Christmas.

Max of Body Politik will customise his skins for what seems reasonable fees - you start with a quality product, too.

Lunar - This is amazing! Thanks for sharing a little of your cosplay self.

I, too, have discovered how very much I enjoy a little costuming and role play....Ren Faires being my venue at the moment.

*still amazed and pleased that you allowed us to see*