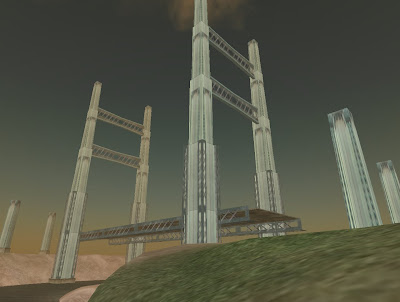 It didn't occur until I was looking for the plans to the third bridge just how many bridges Harborside had. Three in all, one over the small inlet yet to be named.... the other over the smaller part of the narrows and of course the main bridge in Harborside designed after the Tacoma Narrows Bridge (The one that remained unflexi).

Tensai began by leveling the mountain, which of course required a great amount of explosives but oddly enough she usually carries with her one doomsday device on hand and that did the job quite nicely.

While she and the Sheriff conducted a series of stress tests I plotted out the land to its owners using a map, a broken compass always facing east and the eerie green light from the nuclear explosions. Then began the work, lots of work...

One more bridge to go, and if the Lindens do not scoot the land over beside Steelhead I may simply open it up for in-habitation because I am most certain its residents are more than anxious to move in. If you are wondering what will occur while Harborside eventually does get moved, both sims restart and when they come back online they should be beside each other.

Voila! (I may be placing too much faith in the lindens, I had better call them tomorrow) 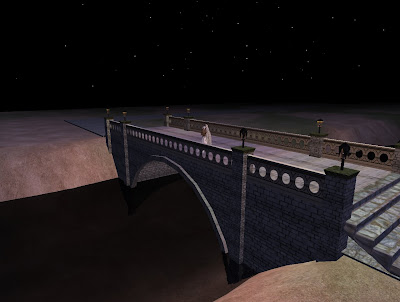 Posted by TotalLunar Eclipse at 11:48 PM