The quiet revere of the morning was disturbed by a loud CRASH from a little cottage of house Eclipse sending all the birds collectively flying through the air.


"Tensai stop trying to kill him!" She had that crazed look in her eyes again while holding a wicked looking saw blade in one hand and a drill in the other.


"Aww come on I just wanted to touch it."

Chronos' eyes widened as he backed away from her pressing himself as close to the wall as he could. "What exactly do you want to touch!?!"


She smiled gleefully, "Your horn silly!"

"The ones on your head idiot." Lunar growled and stood between Chronos and Tensai causing her to frown and pout at him. He took a step towards her and she realized she had no room behind her as she backed into a wall. Lunar inwardly smiled as she brushed prettily dropping the torture tools. Turning around he addressed the other, "It's not as bad as you think, you're a demon I thought you enjoyed pain."

Chronos turned more shades of red and he wondered if he struck an area of 'divulging too much information.'

"I just wanted to see what they are made out of and why they're huge compared to last time." She pleaded then pointed to her own forehead, "And to see those too, and your wings because they got bigger and how the hell can you make them disappear like that, and your ears you didn't have them that long before.... and to see how much electricity you can take... and mfff.." She could say no more as Lunar covered her mouth.

"Astral, she wants to check your astral energy." He amended for her.

"And how much voltage can go through him!" She cried out and was silenced by Lunar's hand over her mouth again.


"You're wife is crazier than before."

"Well no, she is just as crazy as she was before you weren't as interesting as you are now." Lunar sat down beside the demon on the pier. "Remember she thought you were a jaeger."

"How did she take the news?"

"She is content that I have a blood relative though she questions I'm sure and is angry probably that I lied about you and sent you with her father who she has not seen in a few millennium. How did Doktor Timeless react when you were complete?" He watched the demon fidget with his hands and he wondered how his Time Lord father in law reacted to being host of another creature that could manipulate time in a more... darker nature.

"I thought he would be more understanding than that. Especially as to how you bound your astral." He pointed to his own neck that had a collar similar to the one around Chronos' neck.

"It makes you look like a subjugated minion. I thought you owned these lands?"

"Not all of them, and I have my reasons." He stood glancing up at the skies that were now free from the odd attack that was attempted earlier that evening. Chronos simply flew up and the invading army turned tail and ran, it was quite disappointing really.

"In the true relationship of master and servant that was really written, not the pathetic attempt I have come across so much in my travels it is the master who must provide, care and satisfy the whims of the servant. In every nation the leader must sacrifice his own personal life for that of his subjects... now tell me... who is the real master?" Lunar walked a bit then realized something looking over his shoulder to the demon, "And while you are here, don't eat my owls." 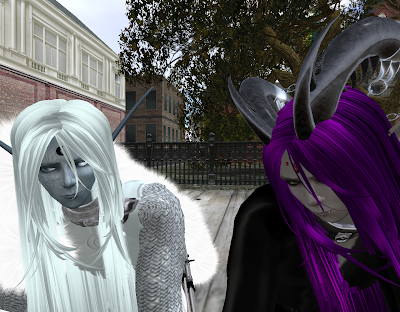 Posted by TotalLunar Eclipse at 10:23 AM

i have a weird fascination with portraits of alts sitting next to each other. thanks.

I am glad I can assist abeit unintentional.