I realized in the time I have spent learning my craft never once did I create something for Tensai. I have given buildings as gifts but my wife has never been a recipient, until now that is.
The theme was Alice in Wonderland and the style was M.C. Esher, dali and a few other abstract artists that I studied before I began work on something that I would never have built before. Usually I have a guide, like a building's RL counterpart to go by so I am quite pleased with the outcome of this eclectic abstract work of art.
I give you my rendition of Alice in Wonderland... or Tensai in Secondlife. 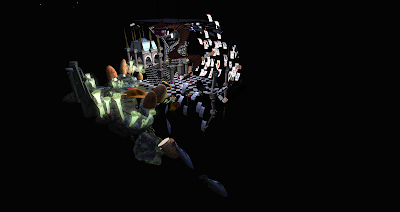 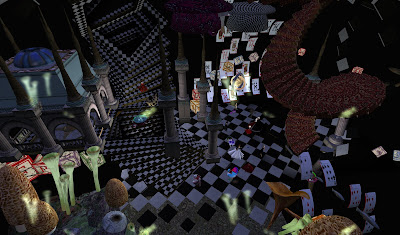 One of the scenes that really stood out to me about the Di$ney remake of the film was toward the end when all the playing cards leapt upwards, but you'll find no playing card men here.
The book was read not too long ago by Shalmendo over broadcast and I was once again impressed with the abstract nature of the story not the movie remake. Also as I am a gamer we all remember American McGee's Alice and its more true to the story darker nature.
I really wanted to put some dancing pose balls up in the ceiling but the spires of the atrium are so high it would be like splitting the dance up and it just so happened someone had a spare teacup that fit into the scenery so well. 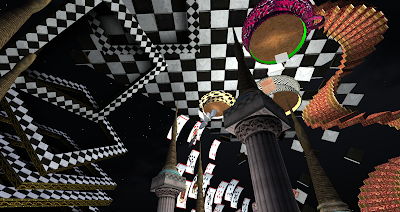 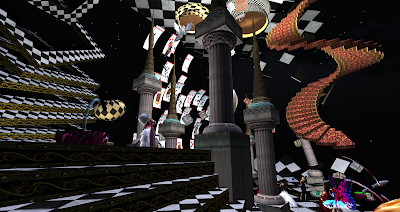 I was hoping someone would come dressed as the caterpillar but alas...
Though I did make a water fall where the water wasn't really falling but going up instead. Would it then be considered a waterfall if the water truly isn't falling? 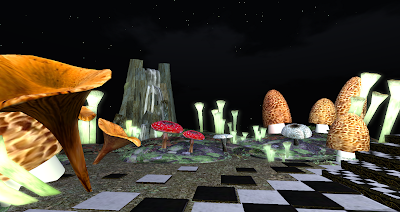 I couldn't help but add in some Steelhead trout wherever possible. Here the trout is jumping out of the teacup spiraling into the abyss. 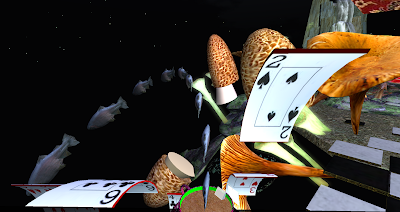 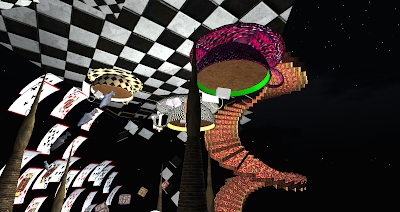 It isn't the photo itself but the little critter behind Tensai that is smiling, our very own dancing Cheshire Cat. 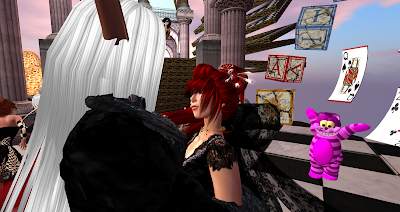 We had in attendance a few red queens but this is the one that most impressed me. The red 'queen' was nearly impossible not to ignore, like a massive accident you were morbidly drawn into staring at Martini Portland and his feathered crown.
Red Queen indeed! 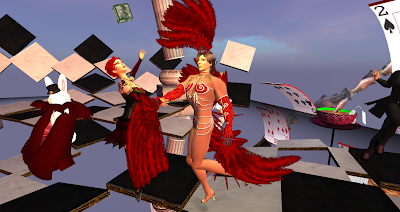 Steelhead's best asset is its people and community hands down. 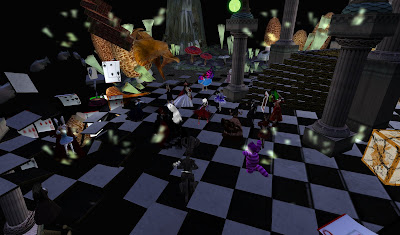 The blocks were interesting to create, a few of them actually move around in a random slow pattern so it was hard to spot. Though if you look closely at the blocks that are hovering precariously close to the cards it spells something out.
Aishiteru. 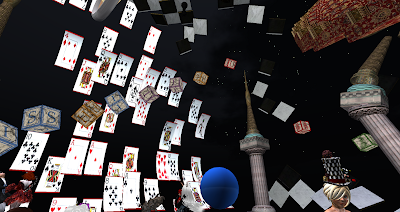 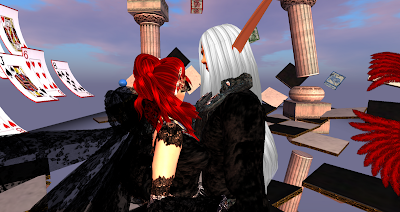 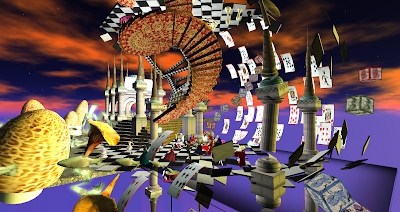 The set will stay up through the weekend before I must reclaim its prims and carefully pack her away in storage on Monday.
http://slurl.com/secondlife/Steelhead/98/125/2050
Posted by TotalLunar Eclipse at 12:31 AM

what a spectacular build and capture of a real life love story done in pixels. I did sneak over to see it .. Amazing as were all the photos shared with all Most Important God Bless YOU Lunar and Yours .. It is a privalage to care about you both :)
all the best
always breezy

wow! I wasn't able to take it all in during the party. Just incredible!