"Lunar, we have a problem."

Words rarely spoken by the Lycan. Feather quill dropped on the counter.

"I saw it when I was making my rounds, I went right up to it and there it is... there's a hole in the dam."

Fingers steepled as I rested my elbows on the counter closing my eyes. Tensai was away that day not to be expected for a few days gathering information on the crystals in the mines at neighboring cities. "Lets see it."

There was a long drought the summer previous but once winter hit we had more rain than we knew what to do with. Approximately two moons ago there was a flood of water so great it surged over the sea walls of Steelhead Docks and not even the books in the Library were safe.

Mrs. Peterman stopped by with measuring equipment and we all noticed the water in the Columbia River was a foot higher than supposed to be. The dam was originally built before we took claim to the lands by the native tribes of LL who sold it to us. Tensai had often wondered about its structure, adding her own iron works to help the surge but it had never been really replaced. Perhaps our overlook in the matter was catching up to us.

The first thing on my mind was the mines underground. The sound of water as I descended the ladders was not promising. Mrs. Peterman raised the lantern so she could see down the dark tunnel, the only thing I could see was water. "We're closing the mines."

"That's a good idea." She whispered. 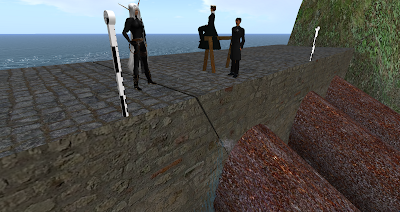 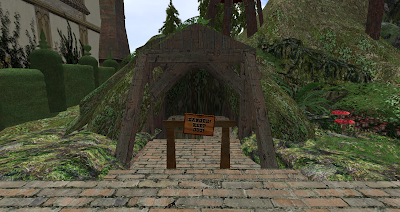 Until further notice no one is to venture down into the mines, anyone in Boomtown with cellars or have mine access please board up the access vents make sure there is nothing of value down there. Anyone found trespassing down there will be severely berated by Tensai and her ear tugging abilities.
We are aware of the problem and will be taking surveys as to the damage being done. *Puts his hard hat on and grabs a hammer* Time to build.
Posted by TotalLunar Eclipse at 10:27 PM

I guess that would sound more ominous if I had ears like yours...