"So, how's things been?" Tensai waltzed into the office obviously in a good mood fluttering about the room like a drunken butterfly before plopping down on the overstuffed couch and kicking her shoes off.

I waited three seconds because I knew if I started talking she would interrupt me and go through a long list of the things she had been doing with the explorers on the frontier edge. I narrowed my eyes at her smiling face and opened my mouth, "There has been...."

"You're not going to believe the time I had! We actually FOUND A SAMPLE!"

I calmly folded my arms and waited as she recapped her entire week with the adventurers and how they found a mine with a tiny few samples of the reddish crystal we've uncovered in the abandoned mines in Boomtown at some obscure area in the lower regions of Oregon beyond our territorial borders. She stood up and waved her arms about for emphasis so I could understand the magnitude of what she was trying to explain to me before she exhausted herself in her own speech, reached into the pocket of her dress and tossed a reddish clear stone on my desk again plopping on the couch as though the whole recap drained her of energy. "That's all we found, I need you to read it." She commanded rather than asked.

I picked up the stone and examined it carefully before closing my eyes and entering into the stone's natural life force. Thankfully it was an uncut and unprocessed mineral. Interesting, the mineral gave off astral... or its own energy source it was faint but there. "Earthquakes."

I opened my eyes, "We have had earthquakes."

"Who cares, I need you to possess that rock!"

"The mines are flooded as we speak."

She sat up and stared at me, "The dam." I nodded and she stood up pounding her fist on my table rather hard. I saved a potted fern from her little fist and found it a safer location away from my wife.

"I have felt the earthquakes not from Mt. Hood but neighboring St. Helens." I gave her the file put together by Fuzzball's accounts and Mrs. Peterman's detailed observations on the rising water levels.

"That mountain would never blow." She muttered under her breath as she scanned the reports. "Can't you make the rocks hold together?"

"My level of possession is hindered, they're processed."

Her eyes scanned the work order for materials I sent to Cobra. She smiled and looked over the paper, "You bought me extra dynamite for my birthday... how very sweet of you."

I felt the blood rush to my cheeks and coughed standing up, "We're needed in Boomtown." 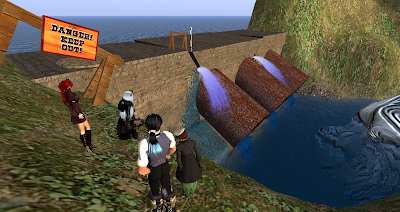 Mrs. Peterman put up a few more saw horses to keep people from getting too close to the already unstable dam.

There was another massive crack that formed within two days, the iron tubes that released the overflow were not working correctly.

"This is bad." Tensai muttered looking down at her watch, "We have to put up a retaining wall before we can begin work on the dam but... " She pulled at her bangs frustratingly before swearing a bit under her breath. "Cobra better get here with the supplies we need or I'll box his ears.."

I stood away from her not liking that particular threat.

Posted by TotalLunar Eclipse at 7:46 PM