The making of dreamland...

First of all we had no idea what we were going to build. Tensai and myself came up with some sort of conceptual design over dinner at Denny's at three in the morning.

We picked elements out of the story we wanted, the chessboard, the red and white towers... the Teslatron was something completely out of the blue. We had intended a water fountain and I came across this oddity and she went with it.

We began approximately a week before the relay, before that the only things that were even worked on were the flower lamps, and I even say that loosely. I made metal flowers.

Procrastinators, not really we're sim owners and community leaders, to find the time to rip away from that is pretty difficult.
I found some conceptual design from artwork, books, movies for Alice and went from there.
We translated this gateway: 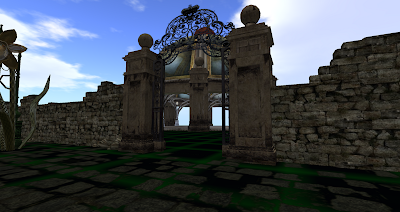 Here is the Teslatron in its infancy. 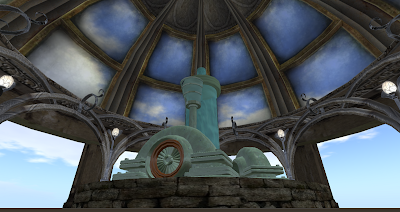 The beginnings of the chessboard and sundial: 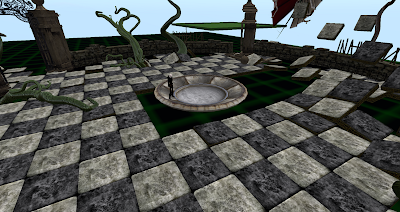 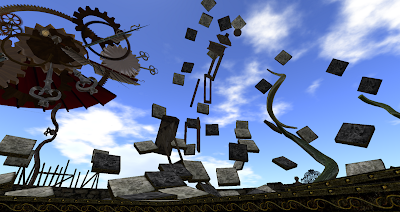 The weeping angels are symbolic in their own rite but my wife being a Dr. Who fan... 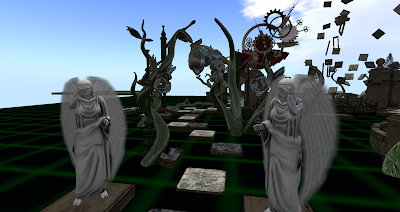 Shibaozhai Temple in its first day. I had no idea what to make for the red tower, I knew I wanted a pagoda, then just researched every 'red pagoda' I could find until I came across the temple. Then it was love at first sight. 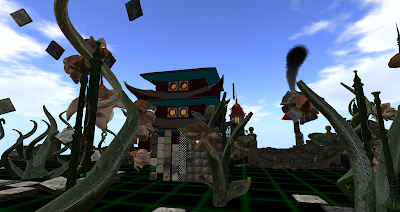 Our super secret building facility. I am so grateful for those who let us build there. 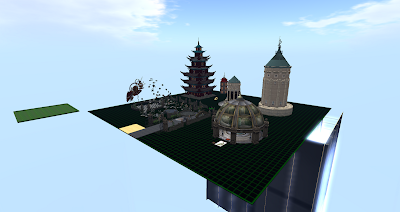 I knew I wanted the white tower to be the Mannheim Water Tower for several reasons, one of which was it was already built and time was sadly against us. Then I rezzed the tower I built and I believe Seattle could hear me smack my head against the desk. The damn thing was too small. So in the span of four hours I had to rebuild it from scratch. Here's the scale or lack thereof from the temple to the old tower to the new one. 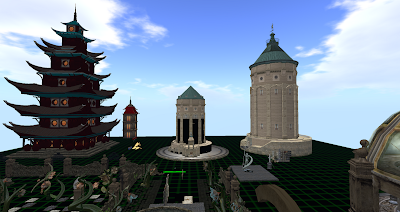 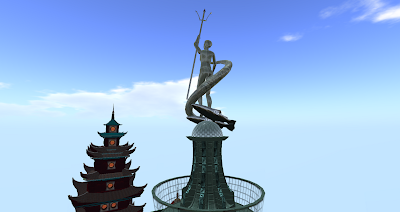 Certainly the most interesting thing we've created that's for certain. I am completely enamored with the builds, the concept, the style and I am looking forward to reintegrating that back into Steelhead.
- Lunar aka the mad builder
Posted by TotalLunar Eclipse at 11:30 AM

For me, yours was the most emotionally intense and moving build of this year's relay.
Walking through it was challenging, as it really spoke to my experiences as a family member, a caregiver, and a nurse taking this journey with others.
I loved the fact that it was difficult, and did not offer easy answers and homilies to something that changes people and families forever. And that while the experince of transformation can be excruciating, the hope and support can result in an experience of transcendence for all involved.
Also, the Teslatron was sparking awesomeness :)