The train ride was far too long.

Tensai was sleeping soundly, a bump on the rails caused her head to tilt to the side resting on Lunar's shoulder.

He looked down at his wife letting her sleep for awhile longer until the sun began to peek over the horizon. Leaning forward he narrowed his eyes looking out over the distance. Gently nudging Tensai he whispered, “We’re almost there.”

“Huh?” She wearily rubbed her eyes before suddenly raising her arms stretching, elbowing Lunar in the nose. At his exclamation she snickered, “Sorry.”

“You’re a hazard woman.” He muttered holding his sore nose.

The train pulled up to the station and soon the pair was standing in the familiar grounds before the red brick of the Steelhead Station as the early morning sun began to rise. Although he was relieved to finally be home Lunar knew there was an overwhelming stack of paperwork waiting for him at the office.

“Welcome back Sir and the missus of course.” The conductor tipped his hat to Tensai.

“Builder be praised we’re home.” Tensai yawned loudly, “I get to sleep in my own bed tonight.”

“And blow up your own basement.” Lunar muttered helping the porter with the last of the luggage. The sheer amount of luggage made an interestingly big pile around him that reminded Lunar of a fort.

Tensai looked around to their trunks, “I’ll send for Messenger.” She clicked a button on her wrist communicator and stared at Lunar, “You seem tense.”

“I should go see what waits for me.” He muttered glancing towards the direction to town hall.

“Go, it’s been on your mind for awhile now.” She understood his need to get to work. He’d been having strange dreams for the past several weeks and had been growing increasingly tense… even though their business out of town was tense enough the dreams hadn’t been doing him any favors. She gave him a pat on the shoulder, “I’m sure a scamp will show up too, so don’t worry about the trunks alright?”

Lunar nodded, patting her head blankly as he walked past her down the road towards city hall. He had been staring at his feet the whole time he was walking in contemplation of the odd dreams he had been having.

They were all the same dream. It would start with him walking in the darkness towards the light of his sacred life tree. The tree would shine brilliantly as it always has… but on the branches of the tree sat his two large snow owls, Artemis and Archimedes. 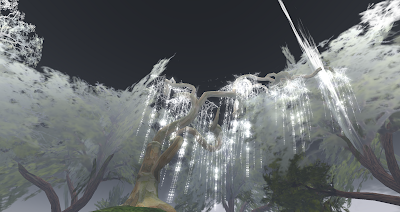 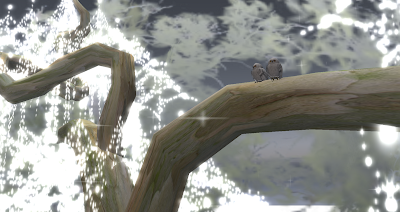 In other circumstances one would overlook this fact. But animals understood the significance of the life tree. No animal would near a life’s tree, it was a sacred oath to those who spoke with the earth and they respected this oath.

His father had once told him the significance of the sacred tree. Every elf that did not forget to speak or turn away from the language of the earth had one. It was unfortunate that his tree was not planted the day of his birth by his parents but far later in his life, he himself had planted it after traveling to the abandoned forests of Ithill and found the seed of the sacred trees in the grove of Ithill for her children.

In his dreams his owls were on his tree and staring down at him, as though they had been waiting for him for a long time. This troubled him, it caused more stress on him, he’d already had his share of stress from where he had been and didn’t need to have anymore thrown on him. Half dragging his feet he walked into Town Hall and stopped at the elevator fishing through his pockets for the key to take him to his office.

Lunar turned to see Fuzzball standing behind him, his yellow eyes slightly glowing due to lack of sunlight of the early morning hours. Fuzz rarely slept, his wolf’s blood was strongest at night. “It was two weeks too long.”

"Held up the fort while you've been gone."

"The city is not in flames so I'm sure you did amazingly well."

Fuzz snorted, "There were a few close calls though." After the two of them chuckled a bit he stopped laughing, "Some things... happened while you were gone."

Lunar raised a brow at the seriousness of his friends expression, "From your face I prefer a fire or explosion."

Fuzz shook his head gravely then nodded to the elevator behind him, "It's in my reports and you’re going to want to take a good look at them with a clear head."

"Do I look that bad?" Lunar grinned.

"You look like shit. City won't blow up in eight hours." Fuzz took a step to the side from the main doors hoping he'd take the hint. He'd never seen the elf so tired before, even after that building spree that kept him awake for over a week straight. Whatever happened that caused Lunar to up and leave the city so urgently after that black owl came with that letter really set him on edge. He didn’t want to outright ask, maybe Lunar would tell him later.

Lunar pushed himself forward off the wall and decided he'd take Fuzz' advice, "Maybe you're right."

"Of course I am, now get." He watched the tall elf actually listen to him. "Wait." He stopped Lunar, the elf turned his head and stared at him with tired green blue eyes, "The writing on the walls, read my report first before reacting."

Lunar raised a brow at the odd caution before turning around and waving his hand, "Night." He soon came across the thing Fuzz told him about. Frowning he put a hand over the words and found these to be fresh, the tar sticking to his skin. Whatever this was even set Fuzz on edge, he best get some rest before he really dealt with this.

Wiping the tar off his hands he made the several mile trek home by foot passing a few more of the same ‘graffiti’ lining the walls of some more buildings. He narrowed his eyes at it and kept walking, this he would deal with in due time. 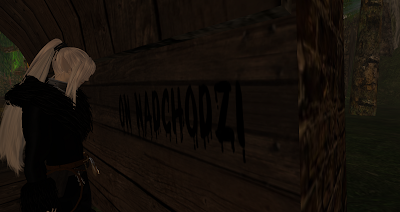 Yawning he arrived at the gates of his estate and wearily blinked his eyes.
A splattering of feathers on the ground caused him to still.
Slowly he looked up and his eyes widened at the sight of hundreds upon hundreds of snowy owls sitting on his roof all staring down at him, "What's going on?" 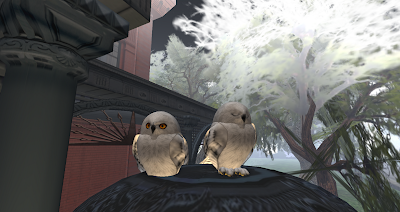 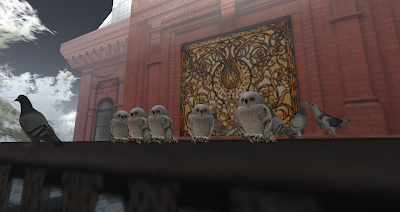 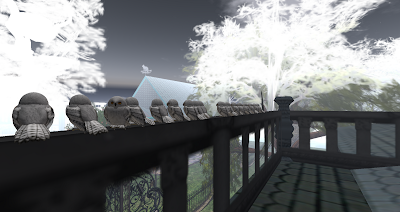 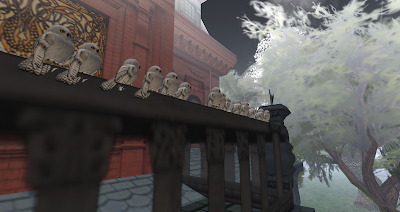 To read more of the 'Steal Head' storyline visit: http://steelheadsl.ning.com/profiles/blogs/steal-head-story-so-far-part
Posted by TotalLunar Eclipse at 10:04 PM

I've commented over on the ning - great post! love the owls :-D

You'll have a lot of droppings to clear off ;-)

And some mice bones, I think!