Pulling out gossamer hair in frustration 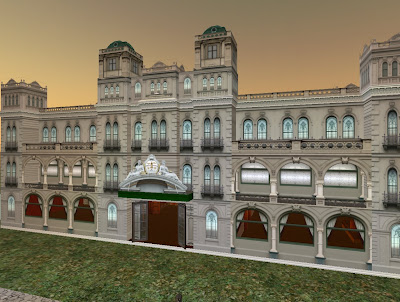 There comes a point in time where you just say, 'put the damn thing on the ground and be done with it.' Last night was one such night. After months of planning and weeks of staring idly at the screen while drool leaks out from the side of my lips and absolutely NO mental capacity or inspiration to build I finally got to a point where this fine building could be grounded.

The favorites among my ten thousand textures comes from Miss Persephone Gallanio. A red headed muse with an eye for building. A woman of fine taste and extraordinarily meticulous detail in her textures I suggest her work to anyone in the trade. She has great knowledge in building having I believe a degree in such a field.

Our town is growing and with such growth some of our buildings had become unsuitable with the populace demands. After having almost completely rebuild the town already I had my eyes on the town hall for quite some time.

Inspiration came from the building in which the textures were taken from. The Melbourne Windsor Hotel, a fetching build I could not cease my desire to recreate such a thing. My thanks goes out to Edward Pearse for all his work with the crest that lies between the two statues above the front entrance. You really should take a good look at what's on there. Edward, thank you again.

Small little details such as stairs, doors and finishing touches must be done before I can pass inspection to allow the offices to be filled. So bear with me a bit on the detail work but its better done while the building is on the ground rather than in the air.

So... may I present to you, Steelhead City Hall.

*Lunar salutes the flag before wavering a bit and falling face first into his pillow*
Posted by TotalLunar Eclipse at 1:45 AM