Its been close to a RL calendar year since myself and Tensai were given estate powers over Steelhead City and heading closer to the anniversary date I begin to have nostalgic thoughts about the dark past of Steelhead and the bright future it has.

There are a handful of people that cringe when thinking of the former management and I do not blame them in the slightest. The original residents can be counted on one hand and they are still here and perhaps until they give up SL will always be in Steelhead. It is one thing I found very interesting about Steelhead, that its people are amazingly loyal. It was the first place both myself and Tensai felt at home despite the poor management that kept its citizens on edge. It made everything in transition worth every effort and every prim laid.

When I look at the past I see the long road to change we took. Being a novice builder I had not the experience nor knowledge of creating the builds that now line the skyline of the town. Being novice managers we both had to learn things we had no prior training for, both in technical and sociological aspects. There were mistakes made, I will not be the first to deny this, and even then we still hung on to what every one of us knew had the power to become something great. We only needed direction and experience. I believe one of our most trying times was when we disassociated ourselves from the other 'western' sims. It split part of the community, created rifts before we merely turned away from that genre. That took a toll on our traffic for awhile before old buildings were completely torn down and the face of Steelhead started to become something different and... unique.

That new face opened the door for alliances in other more notable sims, such as Caledon. In time our architecture and uniquely structured community began to draw in people, no more were we tied to success because of the western theme we shared with towns such as Tombstone and Sigil. After the success of the Harvest Festival which was a Caledon/Steelhead project Steelhead was ready for growth, we had little land and many who desired residence.

The want for growth had been something dreamed of in months before it was created reality out of necessity, but it was Desmond Shang and Serra Anansi that saw great potential and divulged secrets of success for growth and for their help I shall forever be grateful.

So we took a chance despite RL financial struggles between myself and my mate and on October 31st we opened up the concept for Harborside, a land based on the Kitsap Penninsula and Tacoma Narrows where our humans reside. It took two months but we had enough to prospect the land and so on December 24th, approximately one calendar year after myself and Tensai moved into Steelhead the land doubled in size. In the end its really not alot of growth compared to our sister sim across the great waters in Caledon, but to Steelhead it is a goal long since dreamed and desired and now attained.

Kattryn, Tensai, myself, and Fuzzball along with Christine, Lumina and Darien take pride in our city because we've been here for a very long time through the good and most importantly the bad times. There are more that have come and stayed and still that loyalty and sense of community has never been lost even now. Our family is growing and we welcome them with open arms unless you're a griefer then it is mandatory that Tensai destroy you.

Soon we will expand again with Boomtown, then Port Harbor and recreate the pacific northwest of Oregon and Washington in our unique Steelhead way. For now, we'll see where it takes us and how far we can get.

Someone who had not been to Steelhead since the days of the old mayor Steelwolf dropped in for a visit, was completely and utterly astonished and left. Were they perplexed at the change? Where they disgusted? I can safely say that I do not care what we used to be, I care what we are becoming... and it is great.

So lets see where this takes us, shall we? 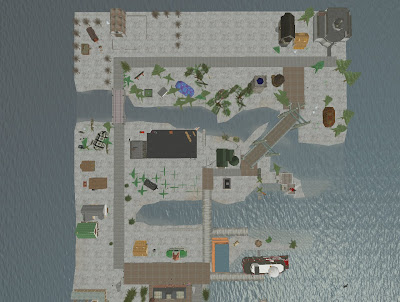 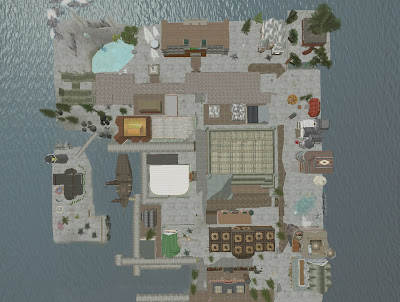 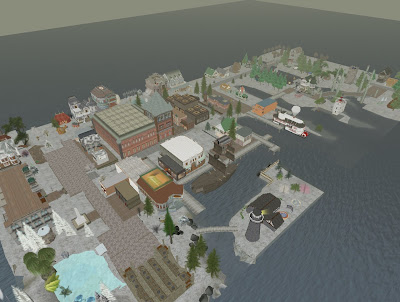 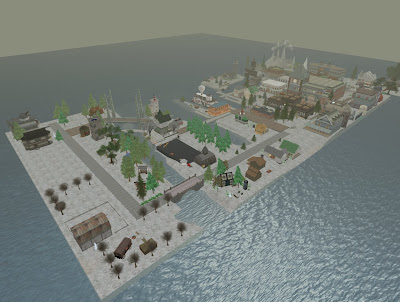 I even see my tree house from this shot.

Posted by TotalLunar Eclipse at 11:40 PM

Hey, I can see my house from here.

Don't care much for talking about the past. That was also during the time that meQal kept tping me to that Starlight Isle hellhole.

Previous management may've kept us all on edge, but that place made me seriously want to hunt them down in RL and strangle the shit out of them.

I would just like to say thank you to all of you - Lunar, Tensai, Kattryn, Christine, Fuzzball, Lumina, and Darien. Steelhead is a wonderful place filled with fantastic and interesting people. I am proud to be a part of the Steelhead Citizens group and always look forward to my time there.

Keep up the great work!