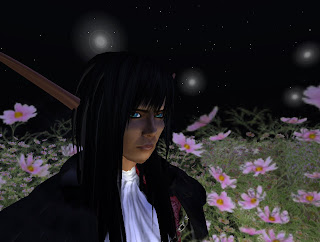 I stared at my reflection in bewilderment.
Tensai pointed and laughed. "You look utterly human!"
I wasn't sure whether to be flattered or offended but decided since this was Tensai I should just be grateful she hasn't offered to fix it.
She stared at me for a bit before putting a finger to her lips, "I can put together a dye made of dried liver and white paste."
"No... no thank you dear." I took her hand and patted it gently.
"It's ok, I think I have some of the stuff here to do it. I swore I put that salamander tail somewhere."
When she crawled under the kitchen sink I ran for it. I made my rounds in Steelhead and just ended up in my rarely used office in the town hall. I guess I could do something productive here instead of the alternative behind... going home.
I didn't have time to figure out what was going on with me, why the odd mark on my forehead and now the drain of all color from my hair as well as my need to communicate telepathically. I had a city to run, another city to plan, some lots to sell, a tree house to grow to maturity and someone was threatening members of my staff.
From all the projects I have been working on I have had practically no time to sit and do paperwork. Weeks of neglect had turned my desk into a mini skyscraper town made of stacked paper.
It was well into the night when I caught a shift in the air. I looked up to see a set of catlike eyes staring back at me from across the desk just over a stack of papers. "Koen?" I stood up looking down at his small form. I barely knew this member of the Mason family, I had seen him in passing but never directly spoke to him.
His dark tabby face tilted upwards to stare at me for a bit blinking a bit in surprise. "Mayor Eclipse?"
Maybe he didn't recognize me with ink colored hair, my white hair was always something that defined me. "An experiment gone wrong I'm afraid. Please just call me Lunar, Mayor doesn't quite suit me."
He shrugged a bit and sat down across from me. I parted the red sea of paperwork and smiled, "How is your father?"
"He has a pimple."
"Ah yes, I had heard that Darien Mason was suddenly a younger version of himself. Well I am sure this will settle itself out in time. He is quite resourceful."
"He's twelve."
Well perhaps it won't settle itself out as quickly as the good doctor would hope for. "What can I help you with Koen?"
"He told me to give this to you."
Koen placed a small leather bound book on the desk and I reached out picking it up examining the first page. "Purdie." I looked at Koen who nodded a few times before he stood.
"I have to get back to the TARDIS."
"Thank you, I'll keep this with me." After Koen left I sat down and began reading through a few of the handwritten pages. He must have been in a hurry to document this before he forgot everything.
Second sight is akin to what humans call hallucinations or out of body experiences. It may be an event that appears vividly or credibly to the mind although not actually present. For humans it is taboo, rarely spoken of and believed. For those of white blood it is a connection like the one we have with nature or in my case the moon.
The sisters of the swat team dismissed it but I will not turn a blind eye to something that could very well be a clue to ending this mayhem that has befallen this town. I closed the small book and tucked it into a coat pocket. Before she tries to rub salamander on my hair I'll explain the book to Tensai.
As I was trying not to head home too quickly I saw one of the jaeger's Otto wandering about. Something he said during our conversation caught my ears,
"I gotz a box of zilver from Schteeltopia."
I slapped my hand over my face. Earlier today I had seen Tensai with some un melted silver bars in her lab... I know Cobra is shocked to learn that the silver may have come from his mines this is far from making Fuzzball feel safe.
First things first, confiscate every bar of silver in Steelhead.
"Let's keep this to ourselves for now Otto... ok?"
Posted by TotalLunar Eclipse at 12:57 AM